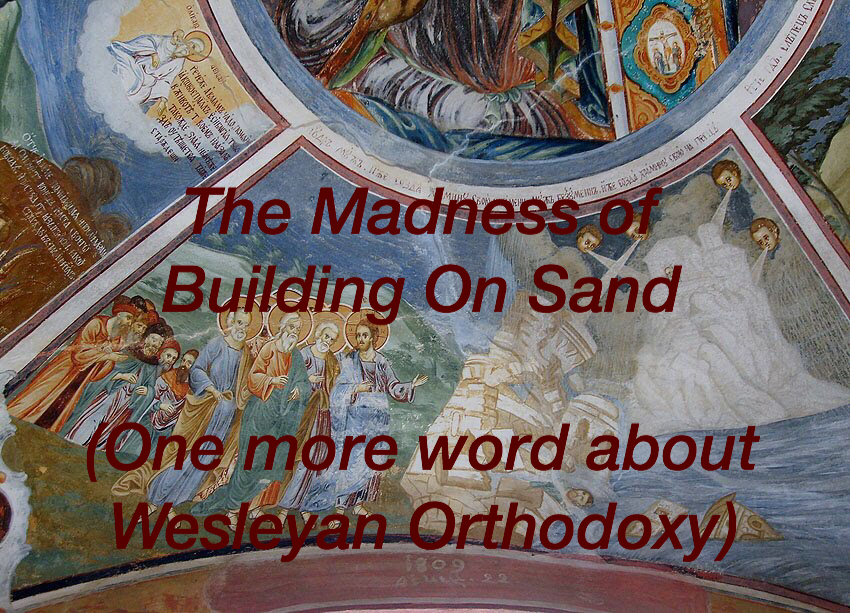 It is madness, says Wesley, to hold to a set of “notions” and suppose that they are “more rational or scriptural than others,” as if we can be “right” or “orthodox” in this way, and as if this were at the heart of our witness. Wesley compared this zeal for orthodoxy to building our spiritual home on sand. In fact, Wesley says it is worse than that; it is more like building on the “froth of the sea.” (See “Upon our Lord’s Sermon on the Mount, Discourse 13).

Wesley rarely (I believe I could say never) used the term orthodoxy in a positive way. At the same time, it is clear that he promoted key doctrines and core beliefs. Doctrines of the trinity and the incarnation, for example, expand our understanding of God and keep us from getting locked into narrow agendas.  They enhance faith…BUT only when in service to the call to love.  When they are used to set up “us and them” categories, or to promote positions over people, or to justify division in the body of Christ, or to lay claim to “faithfulness” for ourselves, they do great harm. When used in service to ourselves and our causes, these good doctrines are placed into the service of the devil, says Wesley. They promote a Pharisaic faith, as Wesley argues elsewhere.  They inspire building on sand.  Yes, Wesley used multiple metaphors to keep us from missing the message, and yet he still might have underestimated how alluring this mode of faith can be. We are prone to such madness!

It makes me wonder why so many Methodists are enamored with the notion of orthodoxy today. What does the word “Wesleyan” refer to in the phrase “Wesleyan Orthodoxy?” Is it simply a reference to our historic roots and a way to make a connection in order to promote a new theological agenda?  I wonder, what might happen if we actually engaged Wesley and let him, as our spiritual father, guide us through our current struggles.  Would that not be our better hope for a Wesleyan revival?

If we did this, I suspect that talk of splitting or schism would not even be on our radar.  I suspect that there would be a lot less labeling. I suspect that we would put a lot less energy into creating like-minded political camps.  Instead, we would distinguish ourselves not by doctrine or code words, but by the love in our hearts and our desire to glorify, not ourselves, but the One who is saving us – even us — by much needed grace.  Our focus would be on how we might “outdo one another” in showing this love.

From a Wesleyan perspective, that’s the way to build our spiritual home on a solid foundation, one with the strength to hold us together by something more than our opinions and positions.  What if we let the Holy Spirit do this work, of bringing us together upon the solid foundation of God’s peace which passes human understanding? What if we poured our energy into growing together in the holy virtues of meekness, patience, gentleness, and compassion, to name those on Wesley’s frequent list. That possibility moves me to joyful tears.

The word “orthodox” is not the only word being used to divide, and I dare say, to do harm. Others include evangelical, justice, rights, tradition, faithfulness, truth, and even love. While I do trust that God can use even our harm to do good, I also see that Wesley wants us to pay a lot more attention to the “woes” that are pronounced upon those who do the harm, especially when the harm is justified as righteousness. I wonder if we need to be a lot more fearful about that – of God taking an anointing away.  What if our focus was on our common “solid” foundation? What might it look like if we were all more Wesleyan in this way?  And thus less mad?

Up Next: Is it time to split? (Wesley had a lot to say about it).

I was recently appointed as the Director of ReStart Initiative, a new cabinet position to provide care and support for those who want to remain United Methodist and who are affected by disaffiliation. I am also a delegate to General Conference. Other appointments include 10 years as the senior pastor of First United Methodist Church in Conway, Arkansas. Playing guitar, reading/writing, and theological conversation are among my favorite pastimes. My wife, Deidre, is also an ordained United Methodist minister, and we have three wonderful adult children, and two grandchildren. I hold degrees from the University of Central Arkansas (BA), Duke University Divinity School (M.Div), and Southern Methodist University (D.Min). View all posts by Michael Roberts