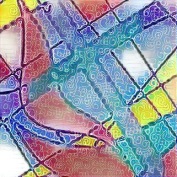 Resolutions often bring hurt and harm. The process taps into deep emotions and strong convictions.  While sometimes necessary to move us forward, the process is also designed to divide. To build upon Bishop Saenz sermon at Annual Conference, this process pushes us into the perspective of disciples behind locked doors, motivated by fear, suspicions, and a need to fix things on our own. In this place it is hard to notice the living Christ in our midst saying “peace.”

After resolutions this year, I have heard colleagues express deep hurt.  I know how that feels and ask forgiveness where I have caused it.  For a personal example, I remember the time when my daughter, as a youth “member,” gave an impassioned speech against a resolution and then was accosted with both physical and verbal aggression.  She literally had to run away in fear.  And, I have noticed people express being hurt, in some cases, by people who express being hurt, in other cases. That’s the power of resolutions.

Much is being said about the hurt that came from the resolution affirming women in ministry.  In hindsight, I believe we need to reflect on this process that can so easily be used to inflict harm, often as an unintended consequence.  It is clear to me that there were intentions of good-will in the presenting of this resolution.  In conversations, the presenters called it an olive branch, a show of support, especially after the tension, and suspicions, around the amendments last year.  I believe we need to honor this effort and give thanks to them.

At the same time, I believe we owe deep gratitude to some of the women who countered this resolution.  While, in hindsight, there may have been other ways to handle it, some chose to excuse themselves from the bar of the conference (not leave the conference) and abstain from the vote.  This was an appropriate political response to a political offering. It was not breaking covenant. It was an action that made us all aware of a need for healing. It may have also saved us from a deeper discomfort. By their nature, resolutions invite opposition.  If it had gotten to that point, someone could have argued that much of the Christian world does not support this and offered a biblical rationale.  Women in ministry would have become an issue to be justified and defend – once again. This resolution was asking women to vote on their own legitimacy – once again.  I can certainly see why this was a problem, and why many felt like they had to come up with a response in the moment (and there was no time for much advanced planning). Again, we owe them our gratitude and continued conversation, not accusations and reprimands.

I have been shocked by the backlash. In most circumstances around resolutions, we fight and move on – sometimes even go out to dinner together. Why did this “fight” lead to such discomfort among us? What do we fear about the deep emotions and strong convictions expressed in this one? It reminds me of father-figures in my life telling girls to “calm down” while telling boys to “get tougher.”  Perhaps the problem for some is that these women didn’t just politely go along. Oh, if we could come together and laugh at the irony and learn from it.

Yes, hindsight is 20/20. In hindsight, I believe that a statement of affirmation would have been appropriate, rather than calling for a vote. In hindsight, I wish some would recognize this, even if they don’t like the way the others handled it. I hope we can all try again in some other form than a resolution.  Together may we give thanks for the treasures of forgiveness and grace held within this “earthened vessel” called the church, full of fallible and flawed beings who are the reason for these treasures and who have the power to make them real.

I am the senior pastor at First United Methodist Church in Conway, Arkansas. I love this work! Playing guitar, reading/writing, and theological conversation are among my favorite pastimes. My wife, Deidre is also an ordained United Methodist minister, and we have three wonderful children, all adults, and two grandchildren. I hold degrees from the University of Central Arkansas (BA), Duke University Divinity School (M.Div), and Southern Methodist University (D.min). View all posts by Michael Roberts